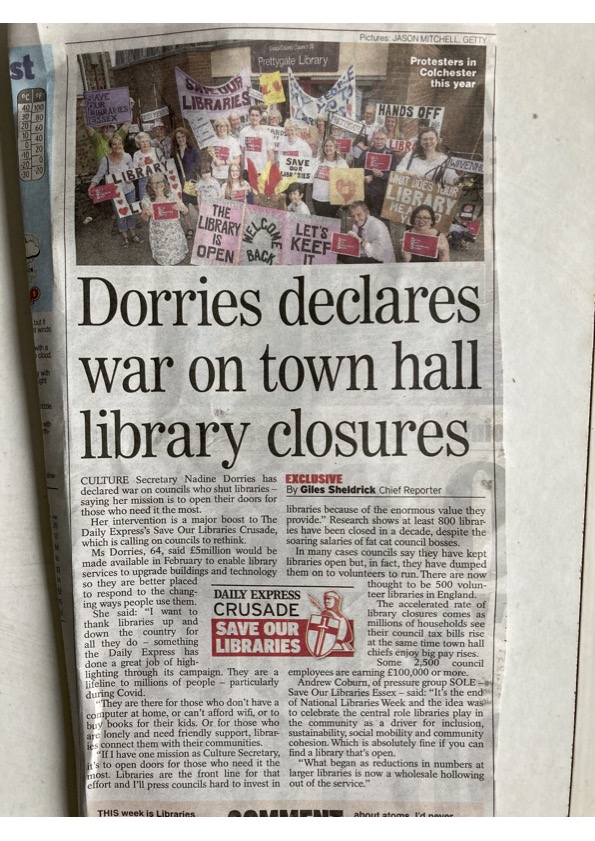 New culture secretary Nadine Dorries has declared herself a champion of public libraries. “If I have one mission as culture secretary, it’s to open doors for those who need it the most. Libraries are the front line for that effort and I’ll press councils hard to invest in libraries because of the enormous value they provide,” she told the Daily Express on Saturday (9th October).
She added: “I want to thank libraries up and down the country for all they do – something the Daily Express has done a great job of highlighting through its campaign. They are a lifeline to millions of people – particularly during Covid.”
The Library Campaign heartily welcomes these words. Now we await some action. “Pressing councils hard to invest in libraries” has to be seen in the context of 11 years of austerity cuts to council budgets that have seen around 800 libraries closed, or dumped on to volunteers to run. There’s a lot of ground to make up.
For instance… the Tory conference has ended with no clear proposals on “levelling up” – a key plank of government policy, but one that remains shrouded in mist.
The Library Campaign has a word of advice for the government – LIBRARIES ARE KEY TO GENUINE LEVELLING UP.
AND LIBRARIES ARE ALREADY DOING IT – supplying vital literacy skills and IT skills, vast information resources, education for all ages, quiet study and work space, business information and advice.

Libraries are right there already in every community – accessible to all, free to use and uniquely trusted.

Evidence is mounting that “social infrastructure” like this is far more effective in levelling up than multi-billion building projects. And far, far cheaper.

“So much of the policy debate around levelling up in the UK has focused on headline-grabbing projects like HS2, the extension of 4G and 5G networks and upgrades to major roads. “However… their efficacy depends to an important – and often unheralded – degree upon the capacities, health and productivity of the communities and citizens they are designed to connect,” says Cambridge University’s Bennett Institute for Public Policy. For more on this, see page 21 of our latest magazine.

If Nadine Dorries can join up the dots, she will get our support.

We have to talk about the parlous state of our Free Press. The 4th Estate is essential in defending our democracy but it is in tatters. Journalistic standards in the gutter, overwhelming influence frm proprietors, no subs & hardly any editors. We can't allow this to become normal

I spoke to someone today who said our library has been a lifeline for his brother who has mental health issues and lives alone. Using our computers gives him a reason to leave the house an interact with people. Totally made my day #libraries #mentalhealth

#Thelittlewartimelibrary is set in Bethnal Green Library @ideastores - It is 100 years old in Oct. To celebrate I interviewed 100 #libraryworkers. I'll be sharing quotes from the interviews every day on my Facebook page. Thanks to @CILIPinfo and all #100librarians #librarians

What a beautiful poem in tribute to Raymond Briggs from @chrisriddell50. Just... marvellous ❤️