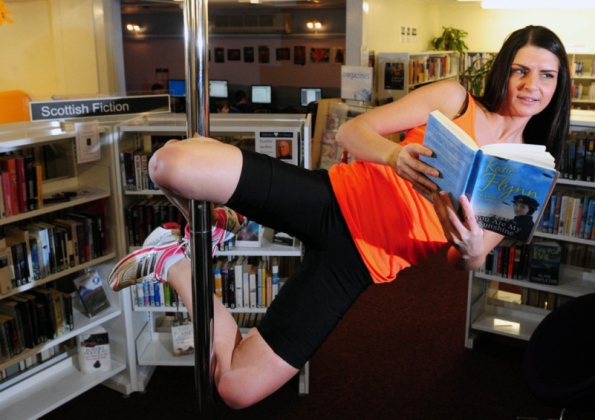 Laura Swaffield, Chair of The Library Campaign, was asked for an off the cuff comment on the novel approaches being planned in Midlothian Libraries on 2nd February, which is Love Your Library Day in Scotland, though given little information about the activities on offer.

The activities planned,  including what some papers are referring to as ‘pole-dancing classes’ and table tennis using books in place of bats, have not only raised eyebrows but certainly got a lot of people talking.  The ‘pole-dancing’ is little more that a one-off fitness session on offer to over 16s in a single  library on the day.  Other activities planned are Scottish country dancing, workshops for would-be authors, X-box competitions to engage youth and their parents, and musical performances.

The story has been covered in The Daily Telegraph, The Guardian, The Scotsman and today in The Independent so the novelty of the activities has certainly grabbed a great deal of publicity! You can read the articles via the links below:

Laura was misquoted in The Telegraph article.  We reproduce the comment she added to the article here. Laura wrote,

“I’d like to reassure members of the Library Campaign that I haven’t really turned into Lady Bracknell, as quoted.
For instance, I’d reserve ‘absolutely appalled’ as a comment on the fact that 200 public libraries were lost last year and another 300 are likely to go this year.
Even using books as bats looks acceptable compared to that.
Laura Swaffield
Chair”

The Library Campaign is very clear that we support local groups, in what ever they feel best meets local needs, and do not sit in judgement. The concept of using books as bats  does seem a little far fetched and some will see it as showing little regard to the mainstay of libraries – the precious and varied book stock within. The details are sketchy and the books may not even be intended to be used as physical bats or they may be mock ups or even written-off stock.

The choice of activities has certainly got Midlothian Libraries an awful lot of attention in a very short space of time across the UK and if that draws in more people, allowing the service to shake off a stuffy image or attract people who would not usually use libraries that can only be a good thing.

What do you think?

FINANCIAL TIMES : 30th August A new chapter for libraries The rash of closures of local libraries by cash-stricken local authorities in England has prompted real (and justified) outrage of…
Read More

20 Replies to “There are worse things than pole-dancing!”