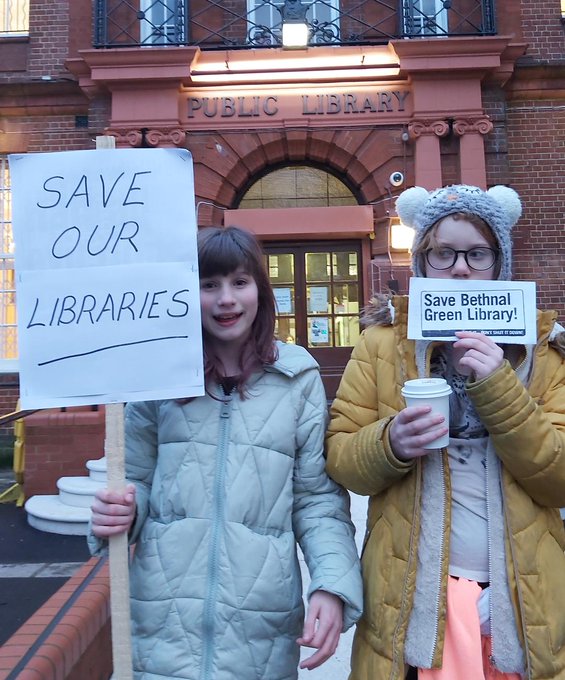 Saved – for now, anyway. That’s the great news from Tower Hamlets, east London, where a determined campaign led the council last week (4 March) to scrap its library cuts. There will be a “review” in 18 months. Planning to meet any future challenge starts now…

TLC talked to Glyn Robbins, one of the main organisers of the public campaign. All the local unions – Unison, Unite, GMB – backed the campaign. But public support is vital, Glyn says. A campaign can be dismissed by politicians as self-interested workers “just defending their jobs”. Showing that libraries are vital to communities makes that much harder. Also vital was a clear, simple and united message – just leave the libraries alone.

Here’s a tip: start early! Steady opposition began as soon as preliminary plans were aired last November. They included closing two (out of eight) libraries, running down two others, sacking 35 staff (one-fifth of the total) and reducing hours, to save £1m (from a budget of £4.4m). A further £600,000 was somehow to be saved through “online provision”.

By March, concessions had whittled down the projected saving to just £365,000. And it was obvious that the damage to services – and the council’s reputation – wasn’t worth such a small sum.

Then everyone piled in.

* The pandemic was a constant theme. “You shouldn’t close libraries ever, but certainly not now!”

* Children, with help from the scouts, made a powerful video about their need for libraries.

* An online petition collected 2,300 signatures (Glyn says signatures from outside the borough were valuable, telling the council that “other people are watching you”.)

* Social media spread this and other messages. Seeing all the likes and re-tweets were really encouraging, says Glyn – “you can’t run a campaign these days without social media”. Among the celebs who signalled their support were Alex Wheatle, Malorie Blackman, Michael Rosen, Stella Duffy, Patrick Gale, Kate Hudson and Vaseem Khan.

* The local paper covered the story, of course.

* Local author Kate Thompson got an article into the Guardian. Fortuitously, she is just now publishing a book on how the local library (evacuated underground) helped East Enders survive the blitz…

* Another local author, Jackie Lees, printed and distributed (with help!) 2,500 leaflets about her own local library, Cubitt Town, where she researched her book on Bob Dylan.

* A powerful letter was sent to the mayor by Michael Rosen and local authors Kate, Louise Raw and Sarah Wise, plus professors at Birkbeck College and local university Queen Mary’s. The names, says Glyn, were collected via personal contacts. It helps to have experienced local campaigners who have built up such contacts.

* A local MP, Apsana Begum, helped. Another did not…

* Apart from opposition councillors, a dozen from the ruling Labour party voiced their unease behind the scenes. An uncomfortable split developed…

It helps, says Glyn, that this area has “a strong political counter-culture” built on events such as scandals surrounding former mayor Lutfur Rahman and before that George Galloway’s Respect campaign.

“It was all fairly well planned and co-ordinated. All the pieces worked together,” says Glyn. “It created a momentum, pushed the council on to the defensive, wore them down. “They didn’t seem to understand the wellspring from which all these feelings came.”

Well, they do now.

Happy #LibrariesWeek everyone, and especially to all the amazing libraries and library staff across the world. 🎉

🎉 TODAY IS THE DAY! 🎉 It's @LibrariesWeek! As we celebrate the nation’s much-loved libraries we invite you to share how your library is empowering life-long learning! Post your photo or story with the hashtag #LibrariesWeek

Hello to my new followers! I research this very phenomenon - vocational awe. Treating a career like a vocation leads to overwork, underpay, and other types of worker exploitation. While I focus on library workers in this piece, it impacts many fields! https://www.inthelibrarywiththeleadpipe.org/2018/vocational-awe/ https://twitter.com/keithgjeffrey/status/1576316126245568512

We need to stop thinking of working in the cultural sector as a job, a career or even a profession. It's more like a calling or a vocation.