Skip to content
News and Views
July 11, 2017 admin No Comments

Local Gov: 11 July
Cutting services: a false economy?
‘…the Public Libraries and Museum Act 1964 requires library authorities to provide ‘a comprehensive and efficient library service’ for all persons who desire to make use of it and specifies particular factors to which such authorities must have regard.

However, the Act does not specify exactly what services a library authority must provide in order to comply with its duty. This means that a local authority has flexibility as to how it complies with its duties, allowing it to make effective use of its resources and deliver good quality services.’

Swindon Advertiser: 11 July
Beechcroft Road library to be turned into ‘thriving’ community hub
Parish council has agreed to take on the running of the library and calls for volunteers.

Bath Chronicle: 11 July
Bath & North East Somerset | Council outlines final two options for library site in Bath
The two sites which have been identified are the current library site and the One Stop Shop. Services will be co-located. Campaigners have fiercely opposed the second option.

Burnley Express: 11 July
Lancashire | New chapter for axed libraries
Cabinet report recommends the phased reopening of 14 libraries, nine of which will be run by the county council and five as independent community libraries, and retaining a full service at six libraries which were due to close or offer a reduced service. Three former libraries cannot be reopened since leases for two buildings have been surrendered. The cabinet will also be asked to defer decisions relating to 12 other libraries.

Bexley Times: 11 July
Crayford Library could be the new home of the town’s post office as consultation launches 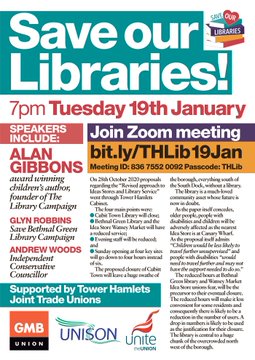 The Joint Unions (UNISON, GMB, UNITE) are holding an online meeting to discuss threats to libraries (known as Idea Stores) in the London Borough of Tower Hamlets. Their guest speakers…
Read More