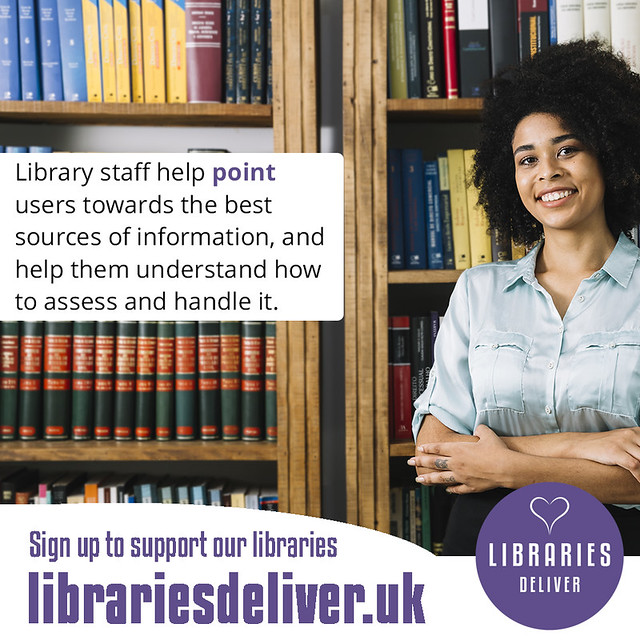 Just launched – a new resource for campaigners, formed by UK librarians’ association CILIP and a USA librarians’ resource called EveryLibrary. So – librarian-led, but potentially useful.
EveryLibrary contacted The Library Campaign well in advance of the launch. We gave campaigners’ point of view and discussed ideas. Their aim, they said, was “making sure that we are supporting your critical work as much as possible and that we are doing as much as we can to help you”.
The basic concept is to –
– make it much easier for people to move from caring about libraries to actually doing something concrete
– harness individual interest – plus the support gathered by local campaigns – into a national movement that can have an impact on the basic issues like under-funding and government indifference
– provide tools and promo material.
For the UK, EveryLibrary has branded itself as “Libraries Deliver”. That links it pretty firmly to the Libraries Deliver label used by the national libraries Taskforce. This, it’s fair to say, has so far failed to inspire the nation… but maybe that can change.
TLC will continue working with them. We think it’s well worth everyone signing up to see what happens next.
Go to https://www.librariesdeliver.uk

"I think the library can sometimes be a bit of a sanctuary for women. This is somewhere where they can be themselves.” | @HannahMargBrown @womenslibrary

The challenge with a lot of censorship debates right now isn't the fundamental need for #librarians to protect intellectual freedom, it's how you counter the idea that the price of your freedom is the right of others to be hateful.

Thought for the day, from a library Twitter elf who spent years thinking that 'picturesque' was pronounced 'pictureskew'. Have a good Monday, all!

I've had a day of IT frustration & trying get my head round a new job so I was looking for a 10 minute musical project as an antidote. Inspiration came from @simonobtv1's drone footage of Woolton Primary's library. The resulting song is the latest addition to #ScrollTheMusical https://twitter.com/simonobtv1/status/1543340067686604802