Last month, Ukraine was scheduled to host an international library conference, instead its courageous librarians are offering bomb shelters, camouflage classes and bibliotherapy

All that’s left of the calm, organised interior is a pile of smoking timber, the powdery black remains of thousands of destroyed books and a blanket of shattered glass. On the 11 March, Russian air strikes destroyed the Chernihiv Regional Library for Youth. At least nine more have suffered severe damage or complete destruction since the war began.

Libraries, like schools, museums and hospitals are not military targets and yet they are being ruthless targeted by Russian troops. Where once librarians worked in an atmosphere of tranquillity, now they find themselves hurtled onto the front line. Ukraine’s defiant librarians have come out fighting and now as well as issuing books, they are writing what could end up being one of the greatest resistance stories of this war.

‘We have set up bomb shelters in many of our country’s libraries and are providing shelter to many families,’ says Oksana Brui, president of the Ukrainian Library Association and Library Director of Igor Sikorsky Kyiv Polytechnic Institute, her tone full of defiance. ‘Our libraries are buzzing like hives, full of librarians, readers, refugees and volunteers.’ 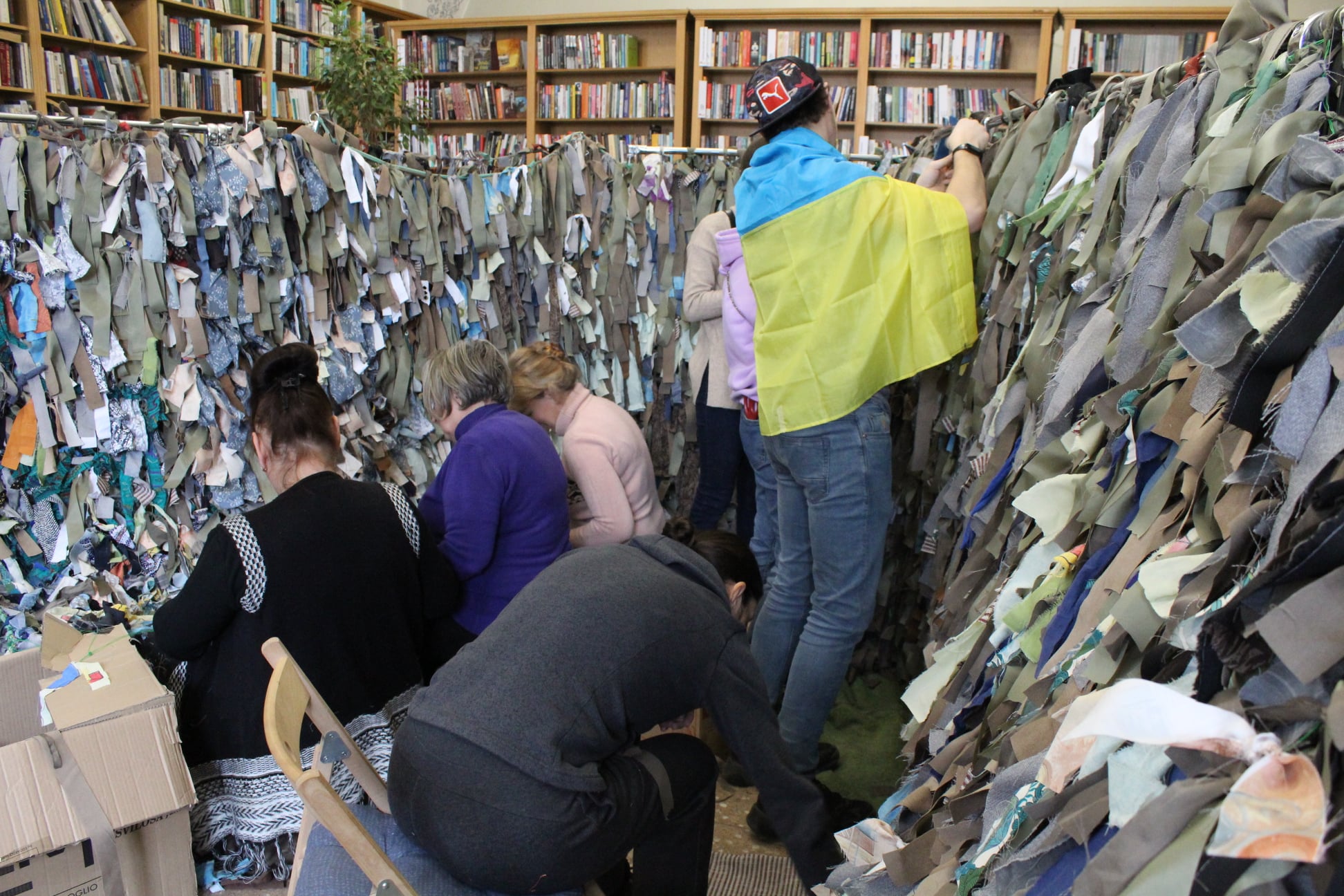 Far from being passive victims, the country’s libraries are involved in the fight for victory. Just as British Libraries encouraged their patrons to Read for Victory during WW2 and embedded themselves as Information Bureaus within their local communities, so too are Ukrainian libraries playing vital roles within this conflict.

Typing to the background sound of shelling and sirens, she continues: ‘We are reacting hour by hour to what is needed, from giving families shelters during Russian bombing raids to making camouflage nets and medical gowns for the military and countering disinformation. We are holding home care courses and acting as refugee reception points as well as transferring books to neighbouring countries that received Ukrainian refugees.

‘We have guides from local authorities, tips from psychologists for coping each day, motivational quotes from literature – and access to the internet. We also serve as hubs to collect goods and humanitarian aid for defence units and hospitals, and sewing medical gowns and knitting camouflage nets.’

Oksana is proud of the way the library service is reacting to the crisis. ‘Many of our libraries have turned their underground book storage spaces into bomb shelters for local communities – they are cosy with lots of interesting books around! Tea and support is also offered, so this is already considered a new library service.’

She acknowledges the importance and power of trustworthy information.

‘Ukrainian libraries are really strategic objects for dictatorial Putin’s Russia. After all, our libraries are the centres of intellectual freedom and civil activity, guides of national ideas, patriotism and European values, spaces of enlightenment and tolerance, multilingual and multicultural. And Ukrainian librarians are warriors against fake news and hostile information. Libraries stand for truth and information. We are the strategic weapon in the fight against disinformation.’

Just as public library loans soared during the Blitz in 1940, with beleaguered civilians seeking solace and sanctuary by reading in underground shelters, so too are Ukrainian’s whiling away the long, dark nights in library bomb shelters by escaping into the pages of a book.

‘Whatever books help to distract and calm down we will bring,’ Khmelnytsky Central City Library wrote on their Facebook page. ‘Along with books, librarians offer their readers virtual exhibitions, online quizzes, psychological conversations with fear-based children, puzzle games and virtual fairy tales for activities with their child in bombs, library-therapy activities.’

Oksana describes their work as ‘bibliotherapy’. She isn’t yet sure how many libraries have been destroyed by enemy fire. ‘Now we have very little information. We know for definite about ten cases, but we know there are many more. Librarians are under Russian fire, often without light, heat, water or any communication.

‘The same situation with Starobilsk Children’s and Youth Library (Luhansk region) and
Severodonetsk City Public Library (Luhansk region) and Shulikivska village library (Luhansk region). We don’t have any information about libraries in Mariupol. The number increases every day.
‘In the 21st century in the centre of Europe, Russia is committing genocide against Ukrainians. It’s really scary when schools, libraries, universities, hospitals, maternity hospitals, residential neighbourhoods are bombed. Russian soldiers shoot at cars with a red cross, unarmed people. There is a humanitarian catastrophe in many Ukrainian cities, towns and villages. People are sitting in basements without heat, light, food and water. The Russian occupiers are not giving green corridors to withdraw the civilians. Hundreds of people die, and children too.

‘Today Ukraine is fighting not only for its own independence and the future of its children. We are fighting for the future of the whole world!’ insists Oksana. ‘Ukrainians are dying for European values! Supporting Ukraine, you are supporting the democratic future of all the countries! The whole world must unite to stop Putin!’

The global library community have come out in support after Oksana issued a note postponing, not cancelling, the forthcoming library conference it was scheduled to host in March. Nicholas Poole, the CEO of CILIP, the U.K.’s library and information association, says: ‘Their message basically said, “we will reschedule just as soon as we have finished vanquishing our invaders.” I salute them.’